On Friday the 6th of August Southampton’s long forgotten old town will be given a new lease of life which will see this beautiful area of the city centre become a valued attraction for all manner of visitors and residents. Over the last ten months, Southampton based arts organisation a space have been working alongside the Heritage department to develop what has become the artvaults project.

It is a little known fact the Southampton has over 40,000 square feet of unused space which lies just below street level throughout the old town. Some say there are over one hundred vaults others say only fifty, but the fact remains that Southampton has the largest number of medieval storage vaults to be found in Europe. This secret history has been kept alive by groups such as The Blue Badge Brigade, which runs regular historic tours around the old town for any and all interested parties, but it became clear that more could be made of these magnificent spaces.

The arvaults project opens to the public on Friday 6th August but I was lucky enough to have a private preview of all the sites just prior to this. The vaults are worthy of exhibition alone but the most intriguing and forward thinking part of this project is the marriage of historic and contemporary culture, leading each to feed from the quality of the other, enhancing the interest of both. As you step through the door of each space you are transported to a new and fantastical environment, which feels as though it has been there forever. Southampton has, up until now, not had a strong and varied cultural image, but through the artvaults project, alongside subsequent others managed by a space, this is set to change.

Exhibitions
The artvaults feature works from six contemporary artists, talents, local, national and international crossing many media including painted, sculpted and installed. Each exhibit stands very well alone communicating through it’s own language within spaces that do not simply house, but in fact assist each exhibition.
Stepping down into Quilter’s Vault one is again taken over by the age and collective history, which seems to hang on inside these spaces. The vault is long and high with natural light sources and figurative shapes at the far end, which draw you in. The sculptures by well-known local artist, Sarah Misselbrook, seem to fit the space perfectly. I am told that Sarah has assisted a space very effectively in developing this project through test shows and so on. It is easy to see why, as her life size works, which explore and comment on current obsessions with bodily purification, are re-enforced by this underground dimly lit space; unable to see the light, trapped by this age-old pursuit of aesthetic over health. The setting, the sculptures and the ever-changing natural light draw you in, seeming to calm causing one to slow down and appreciate each small movement and reflection. This exhibit seems sublimely natural in its setting, Sarah again showing inspirational new works. 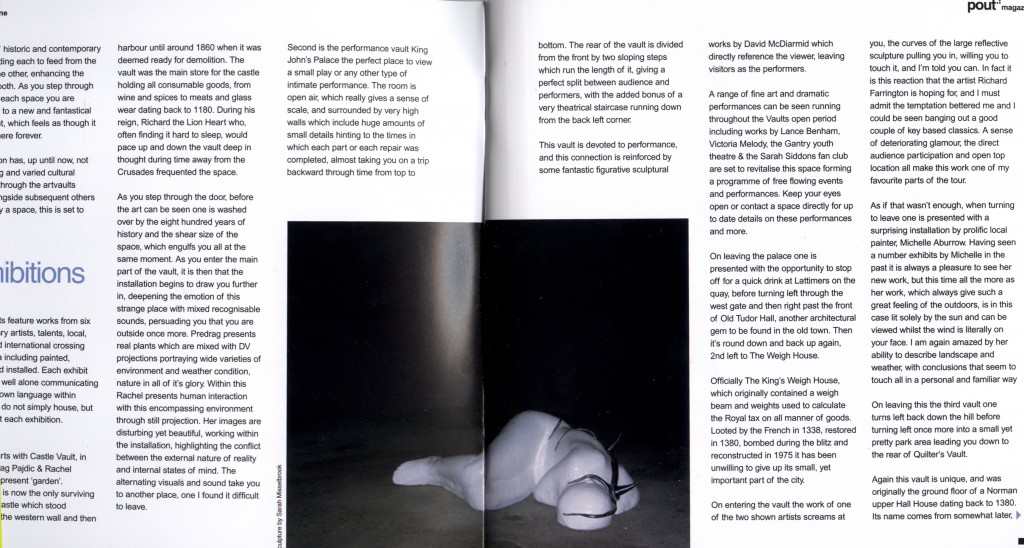