In a week when everyone is going Swingin’ Sixties mad, Austin Powers doesn’t have all the groove going his way. Southampton artist Sarah Misselbrook is inspiring real enthusiasm in visitors to her first public exhibition.

‘Sheer brilliance! I hope you go further in this career,’ said John, another inspired visitor.

The Nottingham Trent University student has not only raised her own profile with Exposure, but it has also put its venue , the Southampton Arts and Music Collective Lounge in the Bargate Shopping Centre, on the map.
‘ Exposure is about two years worth of work, which I have put together during my degree, and it seems to have been really popular,’ says Sarah.

‘People ask me whether I’ve got a certain agenda behind it, but basically it is designed to question our views about the prescribed human form – I’m not actually supplying any answers.’

Sarah – has developed many of the works using her own body, inspired by her experiences and feelings.

‘Basically I don’t know where it’s going, which is the really exciting thing,’ she says.

‘It has all come from the way I feel and my experiences, which are never-ending, so I will always have a source of material.’

Using photographs, sculptures, drawings and light boxes, Sarah’s take on the human form is not quite what you might expect.

‘In one of the early works I used my own nose, which I did just after I got it pierced,’ she says.

‘And with that one I asked someone what they thought I should call it and they immediately said Violation of Innocence. They said, ‘You’ve got such a sweet little face, how could you do that to yourself?’

‘So the work in some ways is a reaction to people’s responses to what I do to my body – but it’s not really a conscious thing.’

Exposure, on the first floor of the Bargate, is on until the end of September. 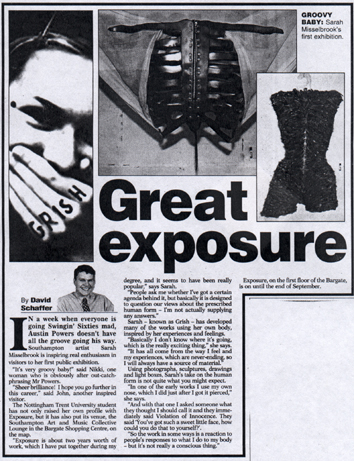