Thieves ripped a potentially lethal six-inch metal spike from a sculpture on display at a Southampton art gallery. Raiders stole the item from a piece by artist Sarah Misselbrook whose work was being showcased at the new free exhibition.

The solid steel spike was torn from a sculpture called 1m2 that shows a woman lying on the floor with the spikes protruding from her back. Sarah, 26, from Midanbury, Southampton, had just opened her Absolution collection in the new surroundings of The Quilters Vault in the High Street as part of a city-wide art exhibition.

The piece that was taken was valued at £250, but the whole sculpture that was damaged is estimated to be worth about £3,000. Sarah, who sculpts in a range of unusual materials including soap and chocolate, said she was disappointed that her work had been vandalised. ‘I am not taking it personally at all but it is a shame because my work is all about getting close to it, touching it, smelling it and even eating it.’

‘This whole exhibition is about putting art out there for people who might not necessarily go to a gallery to see art. In that sense it is a shame.’ Sarah, who has had her work featured in London galleries and on TV, says she is worried the piece of sculpture could be used as a weapon due to the sharp spike.

Her views were echoed by the police who said the spike could cause damage. A spokesman said: ‘We would obviously ask anyone who knows who did this or saw the theft in progress to contact the police.’ ‘It is possible the spike could be used as a weapon but it is very identifiable so we would ask anyone who thinks they have seen it to get in touch.’

Sarah said she intends to replace the missing spike and the incident has not dented her enthusiasm for the exhibition that is scheduled to run until November 14. 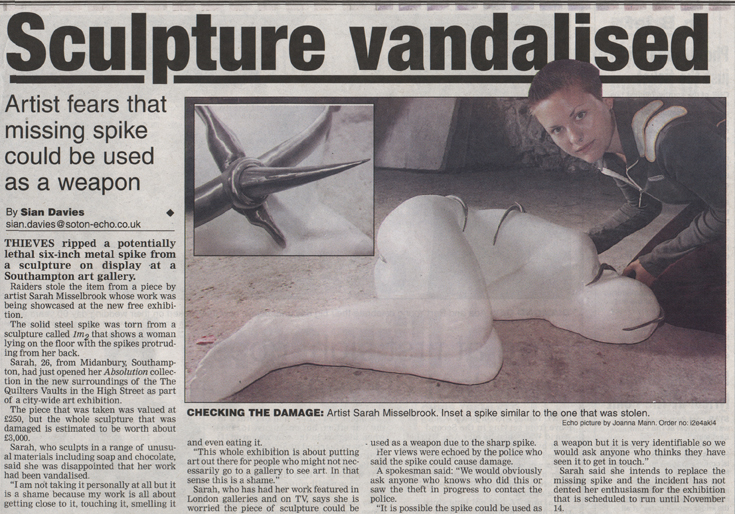